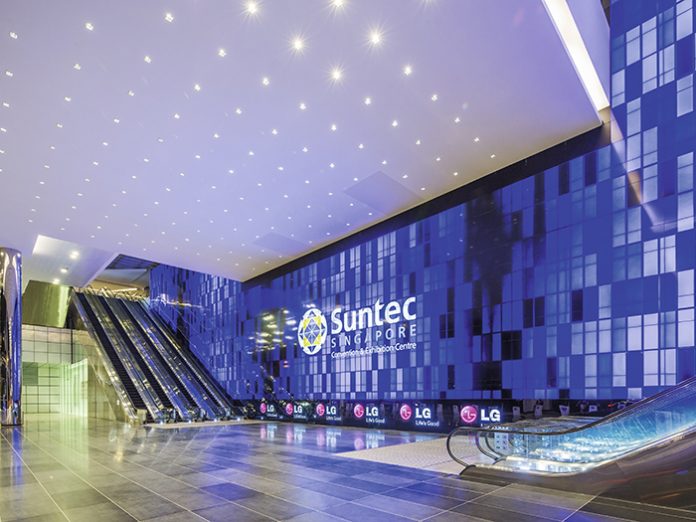 Suntec Singapore – a renowned institution in meetings, incentives, convention and exhibition (MICE) and retail industries – recently revitalised its brand by embarking on a five-year redevelopment of its property starting in 2010. Having gone through a series of partial openings in the last couple of years, Suntec finally completed the last phase of renovations in October last year and fully opened its doors once again – revealing more than 200,000sqm of ultra-modern MICE facilities and fresh, up-to-date retail premises.

Along with a major revamp in architecture and interior design, lighting design was an integral part in breathing new life in to the Suntec development. Bo Steiber Lighting Design (BSLD) – an international lighting design consultancy based in Singapore – was commissioned to undertake the overall lighting design for the US$290m redevelopment project.

Suntec’s building façade and external spaces, originally designed by US architect I. M. Pei and Partners, underwent a dose of facelifts from architects Aedas, starting off with the acclaimed ‘cube’ structure – shelter to Suntec Singapore Convention and Exhibition Centre – all the way to the familiar roundabout plaza – foreground to the company’s retail arm, Suntec City, and address to the world’s largest fountain, Fountain of Wealth.

To inject a formidable nighttime presence to the convention centre, the lighting designers focused on common façade elements – the existing roof and the new vertical glass fins – to form a ‘solid’ coordinated lighting scheme through the varied façade planes. The roof sails were dramatically uplit with ‘wash’ projectors and the roof pediments accentuated with continuous linear uplights maximising the overall roof lighting effect. Continuous vertical covelights were integrated into the nine-metre glass fins creating a rather striking and consistent nighttime feature across the façades.

The convention centre’s western façade called for a much-needed lighting intervention to camouflage the unsightly views seeping through the perforated wall panels at night – generated by the multi-level loading bays and staging areas located directly behind the façade. This presented a good opportunity to introduce an array of LED nodes – capable of animated effects and low-resolution media displays – to the perforated walls onto effectively disguise the back-of-house views.

Once a lacklustre outdoor space, Suntec’s expansive roundabout plaza went through a major lighting design revamp to give it a livelier and more coordinated visual impact.

At the heart of the plaza, Fountain of Wealth was upgraded with synchronised water and light shows and served as the focal point of the nighttime scenario. Overlooking the grand water feature, the Fountain Terrace at Level One was rendered with a complementary yet unobtrusive ambiance focusing on wash lighting of key surfaces such as railings, seating and foliage.

On the other side of the roundabout, the old nondescript street light poles were replaced with signature pieces adding a touch of exclusivity to the streets. The grand canopy fronting the new multi-level shopfronts was made even more impressive with dynamic uplights integrated into its column details. New food and beverage outlets abutting the retail entrance promenades injected their own interesting variations and added to the overall nighttime appeal.

Suntec’s retail development also saw the addition of the new Sky Garden, an intimate outdoor food and beverage destination occupying the retail roof deck and directly accessible from the roundabout plaza via a pair of three-storey-span outdoor escalators. Housing a collection of restaurants and bars amidst the landscaped environment, Sky Garden was designed to project an elegant lighting ambience prioritising the enhancement of the natural settings and the appreciation of surrounding views.

Suntec’s façade and external lighting installation predominantly used LED luminaires capable of colour-changing and animated effects. A central lighting control system was incorporated into the design for full programming and synchronisation of the entire lighting installation. This gives the development the ability to create endless nighttime transformations that would keep it visually interesting and adaptable to various occasions and seasons.

The Lighting design for MICE facilities is in itself a big challenge due to the highly technical requirements that come with lighting multi-functional and specialised event spaces. In Suntec’s case, this was paired with yet another set of lighting design considerations – the cutting-edge interior design and the clients’ wish for maximum design flexibility and advanced technology integration.

Lighting for triple-volume lobby spaces – the entrance lobby in Level 1 and the concourse lobby in Level Three – were designed to cater to different lighting moods and varied lighting levels that could either stand on their own or be adapted to the requirements of major events being held in the exhibition and meeting halls.  Architectural lighting, effects lighting, video walls and other multimedia amenities were synchronised to achieve maximum visual impact within the lobby spaces.

Level Three was dedicated to meeting room facilities that posed some major lighting design challenges: first, the movable partitioning of the meeting rooms; second, a generally low ceiling height across the interior spaces; and last, the use of very dark colour palette throughout the interior design.

Level Three’s partitioned spaces were designed to be fully configurable and needed lighting control that would address that kind of flexibility. A lighting control system with a partitioning feature integrated – enabling all lighting circuits to be grouped, dimmed and controlled based on the required configurations of the meeting rooms.

Diffused linear downlight extrusions were chosen for general lighting of most interior spaces not only for their contemporary look that perfectly matched Level Three’s interior design intent; but for the main reason that diffused linear lights would typically have much better direct glare control – most crucial for low ceiling heights – as opposed to most point-source downlights. Covelight features were also introduced to various ceiling planes to give them a softer appearance and to camouflage their low height. To mitigate the perception of dark interior ambiance, the lighting designers introduced ‘wallwash’ lighting techniques to all major wall surfaces in the meeting rooms and within the circulation areas as well.

Exhibition halls in Level Four were refurbished to become state-of-the-art venues for a vast variety of functions – from travel fairs to professional exhibitions; from weddings to boxing events. The halls required extremely varied spatial transformations to be executed in a matter of hours in order to maximize the potential returns from the spaces. All eyes were on lighting design to provide the quickest yet highly effective solutions in altering the general ambiance of the spaces according to the requirements of events.

Bo Steiber, Founder and Design Director at BSLD, recalls: “Our team had to make sure that the lighting design would not fall short of the expectations for each and every event – that a wedding celebration would be given the same romantic ambiance as that of a grand hotel ballroom; that a company D&D would get the exciting vibe of a top disco venue; that a product launch would be provided with the maximum attention that it required; and so on. Since walls, ceilings and other interior design elements could only remain relatively static, it was mostly up to lighting to wave a magic wand.”

For social events such as weddings and parties, track-mounted narrow-beam LED spotlights were used to focus on tables adding drama and visual contrast in the spaces. These spotlights were specified for individual remote control – via integrated IR receivers – for quick individual aiming and focussing of the luminaires without the need for any scaffolding or boom lift.

The main lighting feature of the exhibition halls came in the form of a blanket of stars – made up of more than 48,000 LED nodes spanning across the entire ceiling space. Every LED node was painstakingly integrated with clear acrylic casing to optimise the sparkling effect of the entire installation. With the use of a sophisticated lighting control system, the individually-addressable LED nodes produced fantastic compositions of dynamic lighting effects ranging from sophisticated starry-sky effect to vivid displays of colourful graphic patterns.

With reference to the retail spaces, the clients’ brief was made very clear right from design inception – the tenant spaces would be the focal point of the shopping experience and everything else in the design should complement this objective.

In response to this, the lighting designers prioritised visual comfort and pleasant ambiance – setting aside over-the-top technology – in the lighting design of the mall interiors. As Josephine Dimalibot, Team Leader for the project and Director at BSLD, puts it: “While it was rather easy for us to inject colour-changing ceilings and maximum effects as widely seen in retail lighting nowadays, this was not the case for Suntec City.”

General downlights for mall corridors were carefully selected to ensure optimum glare control and minimum interference to the tenants’ shopfronts. Linear light extrusions were also introduced as contemporary yet unobtrusive accentuation to the trellis-like ceiling design of the corridors. Ceiling covelights were used to emphasise the graceful lines of the atrium spaces and interior design features.

Lighting levels for corridors and other interior common areas were purposely designed to the minimum lux value allowed by the local authority in order to provide differentiation from typically much brighter tenant spaces.

In terms of sustainability, the lighting designers pushed for energy efficiency and sustainable design within the practical bounds of the project. The selection of light fittings, lighting components, lamp types and lighting control systems were taken into account throughout the design process so as to meet optimum energy efficiency. Lighting design and layouts were thoroughly reviewed and coordinated with stringent power load requirements.

As a result BSLD has created a carefully considered and flexible lighting design that enables Suntec Singapore to make the most of the various spaces.