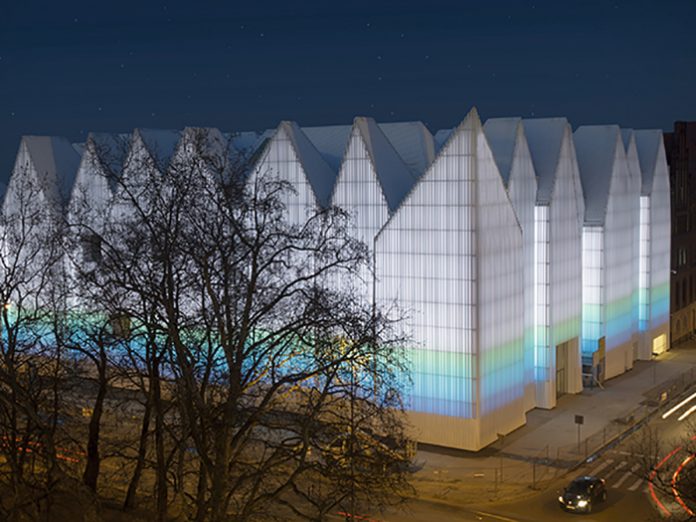 Influenced by the steeply pitched roofs and the verticality of the city’s residential buildings, Szczecin Philharmonic Hall is identified by the monumentality of the upright ornaments of its neo-Gothic churches and the heavy volumes of its Classicist buildings.

Designed by Barcelona-based Estudio Barozzi Veiga with an expressionist mindset, the architectural practice aimed to use geometry to give shape to a new rhythmic composition that conveys feelings by balancing massiveness and verticality. The use of glass as the exterior cladding material highlights how the building contrasts with the conditions of its surrounding environment. It creates a bright, transparent and upstanding object that has been the perfect canvas for architectural lighting design practice Anoche, again from Barcelona.

The design of the Philharmonic Hall goes hand-in-hand with attempts to revitalise the city and restart it as a lively hub with cultural attractions of reference. It is a new interpretation of what were the main attractions of the city, harshly treated by a history of crises and world wars.

The interior of the building showcases the main hall, with everything focused on its needs and on facilitating the movement of spectators and the work of music professionals.

Its overall intention is to reproduce a traditional Baroque music hall, maintaining the typically warm atmosphere inside but with the architects’ own vision and a new reading of the form.

All this is brought together in a single building, designed and intended only for music, cloaking the interior neutrality with an expressive façade inspired by the profile of the city itself, whilst transmitting the necessary personality to mirror the city’s identity.

With this achieved by the distinguishable shapes and colours, the music hall has become a new city landmark. The façade is translucent to allow its night-time expression by lighting its white glass with marked vertical profiles. The backlighting of the façade adapts to different moments prior to concerts, heralding their proximity with staggered phases of intensity, in a nod to the ringing of the bells in ancient temples. The start of the concert is announced with maximum intensity of white light. This announcement, silent and stylish, is part of a broader communication repertoire that the building and the façade provide to music and the city. In fact, the LED lighting system allows for all kinds of configurations, sequences and colours, even though the project specified and required only an expression in white.

There are dynamic and static scenes available for festive days like Independence Day, Anniversary of the Constitution, and Christmas, as well as scenes for special events, concerts, and regular days. The façade illumination starts at the end of the day via the sunrise trigger and stops at midnight, and manual operation is also available via a Glass Touch terminal. By entering a special combination, the Glass Touch is deactivated and the system returns to the sunrise trigger operation. Functionality is monitored by a temperature sensor which automatically switches off the illumination if necessary.

Inside, the uniformity of its white walls, floors and ceilings meant that cluttering the space with visible luminaires was out of the question. Therefore light appears not as a lead actor but as a messenger for the main medium: architecture. It is maximum result with minimal intervention.

The largest area in the building is the Space Hall – giant, transcendent, expressive, neutral and empty. The entire message is offered and communicated there, opening up as a vast meeting point including a cafeteria, where human coming-and-going flows towards the points of attention – the box office, cloakroom, stairs to the main hall, spiral staircase and the cafeteria itself. These spaces, lit as small and open alcoves, express their human concentration by giving off a more welcoming atmosphere and warm lighting that identifies and showcases them.

The lighting fulfils its original function: to show, to lead and to disappear. A major technological challenge, which was achieved by using ERCO 4,000K LED technology for general lighting, was to concentrate overhead lighting with very intensive narrow spots (NSP) from a height of over 25-metres, managing to avoid illuminating the walls surrounding the space.

The use of technology accompanies visitors on the journey to the movement areas of the hall, where the use of metal-halide downlights (also in neutral light, 4,000K) of between 20W and 35W with very extensive WW optics, helps the feeling of volume in these spaces to reach the walls. This becomes visible to help the user detect the change in scale and prepare them to enter the rooms.

Having crossed the gigantic lobby, long staircases close in, changing the scale and preparing the visitor to reach the main hall. A prior area is used to acclimatise the eyes, which is achieved with a transitional space in which pupils can dilate and grow, a black space with very low lighting. This dilation of pupils allows the visitor to arrive in perfect conditions for the surprise to be even greater upon discovering the golden heart of the building.

The main concert hall is lit from above, with 3,000K halogen projectors with intensive narrow spots to gain height and ensure that light reaches the stalls. This overhead lighting helps the visitor better understand the space by showing its brightness and textures. 3,000K LED spotlights, integrated into the geometry of the walls in such a way that they are not seen by users and appear to be reflections of light, are also used to reinforce this luminous discourse of brightness and texture.

The concert hall is also equipped with controls at each point of light, so that the different scenes can be programmed according to needs (welcome, concert, accompaniment, maintenance, for example).

The small concert hall, all black, stands out for the use of neutral 4,000K lighting to showcase the space. The integration of points of light on the ceiling is absolute, and this regulation makes its versatility total at all times. Circulation areas in the room are resolved with more intensive NSP lights so as not to cast light on the walls, which in turn are lit by 4,000K LED points near the floor to provide a sense of security during periods of low light intensity.

The remaining areas of the building harmonise naturally with the main lighting concept, adapting to the tighter budget that these areas receive. The dressing rooms, rehearsal rooms and public bathrooms strive towards practical and integrated lighting, in this case with linear or compact fluorescents, always with warm 3,000K light as they are areas of use, drawing from the architecture to prove integrated and functional.

Szczecin Philharmonic is the new icon of the city and darling of the architectural world thanks to its form and it’s spectacular lighting. Following it’s inauguration in September 2014 it has won a plethora of architecture awards including the coveted European Union Prize for Contemporary Architecture – Mies van der Rohe Award 2015 in May.