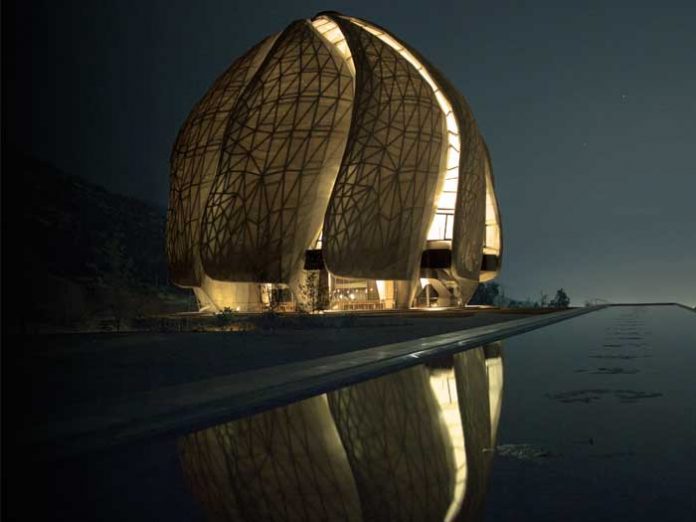 “Build ye houses of worship throughout the lands in the name of Him Who is the Lord of all religions… Then, with radiance and joy, celebrate therein the praise of your Lord, the Most Compassionate,” – Baha’u’llàh, founder of Bahá’í faith

The Bahá’í Temple of worship in South America is one of the last to be built by the spiritually guided Bahá’í community.

As a faith that prides itself on welcoming all walks of life to follow a spiritual path, this new temple of worship acts as a pillar of the community not only for the city of Santiago, but for South America as well.

Age, gender, religious background, no matter what history or identity you carry, Bahá’í is an all encompassing faith that passes no judgment on its followers, but encourages a community-orientated and compassionate approach to spiritual guidance.

Much like the growth of the religion internationally, places of worship for the Bahá’í community have also been established in each continent and all with slightly different designs bringing something different to the architectural world. South America was the last location that was yet to receive its temple, after all other major geographical locations. In the 1950s, Chile was chosen and plans were created to build the next home for their faith. However it wasn’t until 2001 that construction began with Canada-based Hairi Pontarini Architects (HPA) and directing designer Siamak Hairi.

Designed as a place of tranquil prayer and solace, the temple is a magnificent feat of architecture and lighting, situated at the base of the Andes Mountains, looking over the cityscape of Santiago. The structure is reminiscent of a closed flower bud that is on the brink of opening and expanding its coloured petals for all to see. Warm lights peek through the cracks of each white marbled wing, enticing passers-by to approach.

In essence, the design of the House of Worship was inspired by teachings from the founder of Bahá’í Faith, Bahá’u’llàh. Using a metaphor of a house that is occupied by its legitimate owner and what occurs when we allow the divine light to permeate our hearts: “All the pillars of the dwelling are ashine with His light.”

Much like a flower bud about to open, the structure also represents a heart bursting with light and warmth that represents the Bahá’í community.

The architectural project from HPA was designed by Siamak Hairi as a singular object, inspired by the simplistic vision of a house of light, and is composed of nine petals. The building has a steel structure covered in the interior by a translucent white marble. The surface on the exterior of the structure is formed with cast glass cladding.

During the day, the building receives dynamic daylight from the central oculus and from the nine vertical windows situated between the wings, diffusing the light in a soft ambient manner. However, when the sun sets across the Chilean horizon, Limarí Lighting Design (LLD) stepped in as the luminaire providers to create this religious lighting spectacle.

Pascal Chautard, Director of Design at LLD explained how the firm began their journey on the project: “We became involved with the project because we were initially part of the landscape lighting team during 2007 and 2008. Architect Siamak Hairi then approached us to work on the temple building lighting. The general brief for the project was ‘monastic’.

“In relation to the interior of the temple, he wanted very warm and ambient lighting, appropriate for meditation and prayer. For the exterior, as part of the architectural concept, he was looking for a glow effect that will give the impression of a body of light or a flower of light.”

The interior lighting aspects had the objective of illuminating the amazing architectural elements, forms and materials. With the building being so tactile, the lighting design had to bring out the variety of textures from the wood, marble, bronze and glass, without detracting from the architectural structures, all whilst maintaining a discreet presence. The main interior lighting element that creates the warm ambience of the whole building is achieved through small elliptical distribution spotlights placed behind benches and on the mezzanine level. These strategically placed spotlights produce a grazing effect on the marble petals, highlighting their complex textures and shape.

As with most projects, and especially with those that run over an extended period of time, there are bound to be changes and challenges to the designs and approaches. Chautard described some of the challenges LLD faced when working on the temple lighting: “This project was very complicated from the beginning to the end. This was due to the very complex, and at the same time, very pure architectural design. The lighting fixtures were limited in options and proved difficult to achieve the desired results.

“During the lighting process, we also had to negotiate with the engineering team, and on numerous occasions there was a conflicting vision from the architectural team as well as with the construction team, who had their own differing plan, that was close to the clients wishes.”

In comparison to other projects the lighting firm have worked on, Chautard explained how this one was particularly notable for them: “This project was very special because it is the last of the eight continental temples of the Bahá’í religion, and it’s a little bit like a modern day cathedral for Chile.”

Post completion, the team were pleased with the achieved results after the hard work carried out during the lengthy project. Chautard reflects: “The ambience brought by the lighting design is really adapted to meditation and prayer, and the light fittings completely disappear so as not to take away from the architecture and material fittings of the building.”