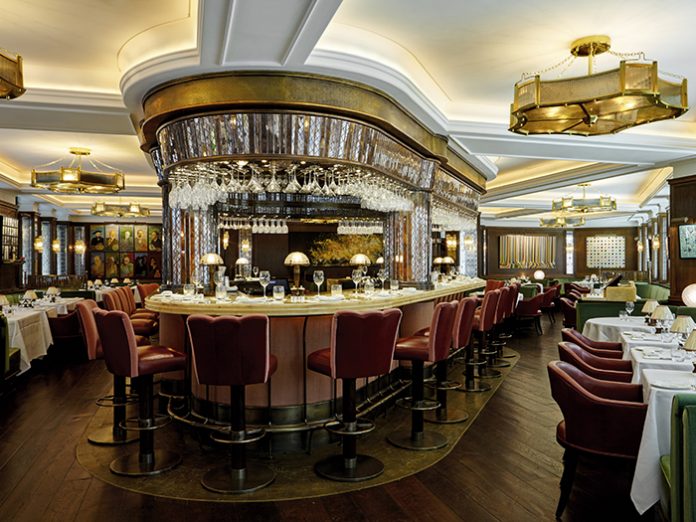 The Ivy has been a London icon for almost a century, first opening its doors to the public in 1917. Having started life as a tiny, unlicensed café in a narrow townhouse in Covent Garden, it took a decade before The Ivy became the most talked-about restaurant in London. It was at this time that the decision was made to pull it down and rebuild it, featuring brand new kitchens in the basement and private rooms on the first floor.

The Ivy remained obstinately full and fashionable for decades, but was eventually sold by Monsieur Abel to Wheelers, the famous British fish and seafood restaurant group in 1950. Following this, The Ivy changed hands quite a few times and by the late ‘80s, the once shining star of London had began to lose its lustre. Until 1990 that is, when architect MJ Long redesigned the restaurant’s interiors as part of a major transformation, alongside a number of notable British artists who were commissioned to create new artwork for the restaurant’s walls.

Recently refurbished and updated by interior designers Martin Brudnizki Design with decor focused around specially commissioned art works by artists such as Damien Hirst, Tracey Emin and Maggie Hambling, a key part of the new look is a modern and intimate lighting treatment by Maurice Brill Lighting Design (MBLD).

“We were approached in late December 2014 as to whether we were interested in the project,” said MBLD’s Managing Director Rob Honeywill, “well this is the world famous Ivy, was I going to say no? With so many new and developing restaurants in the area it was felt that the Ivy was due for change. From the beginning there had to be an understanding about MBLD integrating into the team, which meant that we needed to be understanding, flexible and willing to give multiple options and mock-ups at a moment’s notice to get the design perfect within the context of the restaurant staging and ultimately support the interior designer’s vision within a neck breaking programme.”

With this in mind, it was imperative that the lighting concept was strong from the beginning, with no time to make major changes. However, various sections were mocked up, looking at the detail of light and subtleties of detail by day and night and how MBLD could refine design ideas.

The new feel of the restaurant had to be super-moody and dramatic, yet remain warm and invitin. Commenting on how the architectural lighting works within the space, Honeywill told mondo*arc: “Scenography is always our first focus and how the restaurant’s lighting narrative was to develop. From this, we could extrapolate the direction for the tone of each of the areas and create a three act lighting play.”

For Honeywill, the architectural lighting at The Ivy brings a holistic element to the space, capturing every aspect and facet of the restaurant dining experience. For him, the difference with lighting designers is that they are, ‘looking at every light from every angle, every seat, every walking journey from the front to the back of the space,’ considering what is being looked at in 360º of the restaurant.

“The FF&E is a critical part of the lighting chemistry; the tone and brightness must play with space as part of the overall scene,” said Honeywill. “Then it’s all about the smaller details, like the back of house transitional spaces, the bar, fridges, wine cabinets and service station screens. All of these details can wreck the scene.”

Within a series of ceiling coffers, MBLD installed a new LED linear lighting system by Lumino, ColorCORE, which offers a 2,000K colour temperature and allows a more truly warm rendered atmosphere using the TM-30-15 colour rendition method. These are supplemented by a series of custom-made pendants by ANDDesign, which use the Segula Vintage LED lamp – mimicking the warmth of the old GLS lamp. The same light source is used for the bronze and glass wall lights around the space. At the centre of the space is a new oval bar with a mirrored backdrop, which features integral Lightgraphix downlights shining down through the glasses. Additional lighting is provided by a series of decorative fittings mounted on the bar top, which have dimmable halogen capsule lamps.

“An important part of the brief was that each of the tables should have its own glow to light guests’ faces,” Honeywill continued. “So our rather original solution was to equip each table with a cordless, rechargeable LED lamp by Neoz, which has three brightness settings.” The small, portable table lamps are re-charged overnight by placing them on a special wheeled recharging trolley.

The interior designers retained the original leaded, stained glass windows onto the street outside, and to highlight these at night, Lumino linear LED strips were installed unobtrusively in the window sills – while the commissioned art works are picked out by a custom-designed picture light system, installed by the makers, Hogarth Lighting. “Artwork lighting was a huge challenge,” said Honeywill. “We really needed to use framing projectors for perfect lighting of the artwork but we had nowhere to mount the luminaires above the ceiling. With so much structural interference it made the approach virtually impossible for a consistent effect. In addition to this, time on site was intensive in terms of demands for mock-up and testing, but this is normal for the nature of the project… you just have to dive in, swim fast and don’t sink!”

To guarantee appropriately moody lighting at all times of the day and night, all the lighting within the restaurant is dimmable and controlled by a KNX control system.

Much like the theatres that surround it, The Ivy is made by its lighting, which has brought this classic space to the forefront of modern-day dining and entertaining. “The final outcome was much better than we had ever imagined mainly because of the lower dimming levels involved to create a well balanced atmosphere,” concluded Honeywill. “I’m really thrilled with the final effect.”