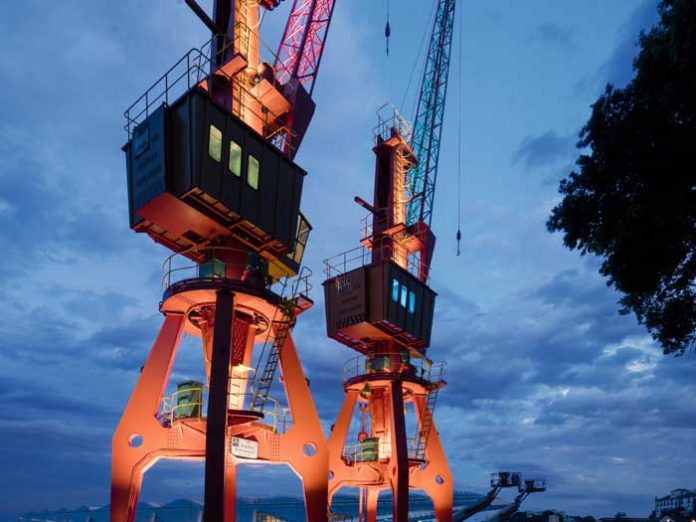 The Pier Mauá cranes have become an international spectacle in the newly regenerated port area of Rio de Janeiro’s downtown.

At this year’s darc awards / architectural, we were overwhelmed with so many talented projects from numerous international designers. It was a fantastic opportunity for designers from all over the world to come together and enter into a competition that is uniquely voted and determined by each other – a peer to peer exclusive in the lighting design industry. One lighting designer from Brazil, Mônica Luz Lobo, Creative Director at LDStudio came away with the ultimate darc award for the Pier Mauá Cranes lighting installation.

As part of a 20 year scheme to regenerate the Mauá Pier, the revitalisation of the Cais Mauá Waterfront is now in its completion stages and open to the public. Taking inspiration from other regenerated ports such as the Porto Antico marina in Genoa, which has an important conference, events centre and nautical fair, and the Port Vell in Barcelona, which has an Imax Aquarium, the largest aquarium in Europe, along with a large complex of offices, the aim for the Mauá Pier was not to copy them, but to draw solutions and inspiration from these examples and integrate their multipurpose construction plans into their own scheme. During this expansion of the area, it was important that the local residents didn’t feel it was another gimmick in an attempt to bring in tourists, but actually an area of sustainability with the community at the heart of it. It has the addition of large spaces for cultural and leisure activities, a shopping centre and a hotel, which are generating more job opportunities and expanding entertainment options for the city centre.

Throughout the regeneration process, there were numerous cranes along the pier, which were used to move cargo in and out. They were later removed and left the skyline clear for the remaining two historic cranes used in this lighting installation. These particular cranes were protected by the municipality in 2016 and have not been in use for the last ten years. The two large, disused cranes from the 1960s serve as a reminder of the iconic, retro past for local residents and visitors to the area. They are also well recognised by the Cariocas (Rio de Janeiro native residents) and the children in the community, who frequently depict them as dinosaur or mythical creature related caricatures in stories.

Keeping this in mind, the lighting designers have created a lighting concept that plays on the idea of imagination and allows spectators to draw back to their childhoods, giving life to the metal creatures. As described by the design team at LDStudio: “It gives wings to their imagination.”

“Our approach to this lighting concept consists of revealing the main structure, as the animals’ legs and upper bodies, using warm white LED floods, with different intensity beam angles.

“We also made the most out of the opportunity of the existent transparency of the operator’s cabins and along the crane’s boom, the ‘arms’ of the imaginary creature, using LED RGB technology that adds movement and pulsation to the characters that we are creating.”

The initial project idea of lighting the cranes came from the Director of the Pier Mauá Company, Denise Lima, who invited Luz Lobo to collaborate on the project, as they have worked closely together on previous assignments. In addition to this, the cranes are within a very close proximity to the Museum of Tomorrow, which LDStudio also completed the lighting design for in previous years.

In this years darc awards / architectural, the Pier Mauá Cranes team received high praise for their work, winning in the Structures / low category as well as the ‘best of the best’ award. In this uniquely voted peer-to-peer competition, it is a great chance for designers to be recognised within their own industry and many find it highly rewarding.

“This is quite special! After coming home with the two awards, especially the surprising one being the darc award, I have shared some thoughts with the team and we are very proud with this project!

“Looking at all the other beautiful projects we were side by side with in the competition, being chosen was very special. All we could wish for and hope to convey is bringing meaning to something through light, and to touch people’s souls,” reflects Luz Lobo.

Luz Lobo describes the initial design brief, given by Lima, as being a very open one, which was in turn very daunting yet humbling for herself and her team. Lima put a lot of faith in Luz Lobo’s team and allowed them free reign of the project’s concept.

Initially, LDStudio developed proposals for a concept that were then sent on to establish light tests and compositions. Once the concept was approved, the project was underway with engineering and logistics, fine-tuning and RGB programming.

As always with such projects there were a few engineering and budget hurdles, but luckily the team had the support from the client from day one, so they resolved the issues together and concluded with the final product.

It is clear the hard work has paid off, as the Cranes have proven themselves as stunning lighting installations on the harbour horizon.

One of the bright features that adds to the crane’s lighting installation is the RGB technology that allows the colours to be manipulated in accordance to the Brazilian public calendar. Culturally, the months are often referred to by different colours, for example the Cranes are programmed to represent October as pink, November as blue, December running into early January as Red and Green and then for national pride, the colours representing the flag are Yellow and Green. The team also opted to add some extra outstanding colours; Red and Orange, as seen in this collection of images, add to the childlike concept of creating these metal creatures in your imagination.

In order to achieve these lighting spectacles, the team had the help from a handful of lighting manufacturers including iGuzzini, Lemca and Philips, with each providing an array of luminaires. iGuzzini supplied the BX11, BX09, BX05 and BX03 fixtures. Lemca provided the Lemca LED Fit Brasília, and Philips offered the Colorgraze MX Powercore and the Color Blast 10° projectors.

With such success coming off the back of this lighting installation, the President of Pier Mauá Company has reflected on the project with happiness and gratitude. Unintentionally, the Cranes have brought new life to the recently regenerated area and have even become part of the nightlife scene, with many locals referring to the location as the ‘place to be’.