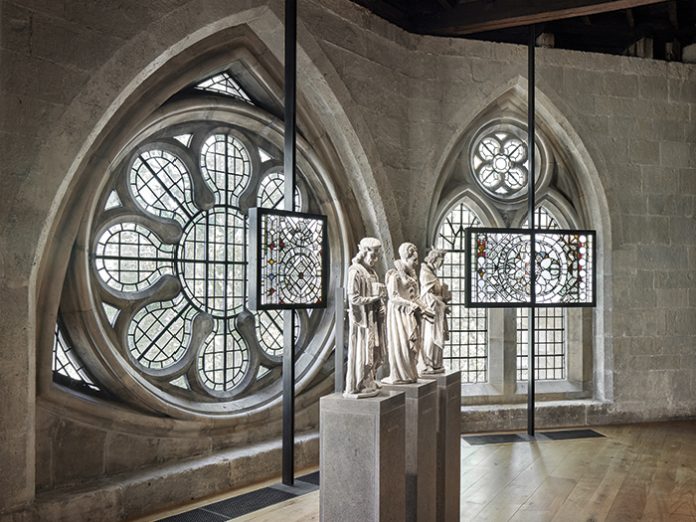 The Queen’s Diamond Jubilee Galleries is a new museum inside Westminster Abbey, located in the medieval triforium, a gallery that runs sixteen metres above the Abbey floor. Hidden to the public for more than 700 years, the opening of the Galleries to the public on June 11th marked an exciting moment in the Abbey’s history.

The Galleries give visitors magnificent views to the Palace of Westminster and into the Abbey church. They tell the history of Westminster Abbey through 300 treasures from the Abbey’s collection, reflecting its rich and varied thousand-year history.

DHA Designs was first introduced to the project by architects and museum specialists, MUMA, in September 2015. DHA Designs had been working with MUMA on a number of heritage projects over the last ten years, since their first collaboration on the restaurant at the Royal Academy of Arts in 2004 to the Medieval and Renaissance Galleries at the Victoria & Albert Museum in 2010.

MUMA describes their first visit: “On our first visit to the Triforium, we were struck by its otherworldly quality and unexpected characteristics – the unfolding spaces with intriguing glimpses inviting exploration, opportunities for views and the stunning vista along the Chancel, the crankiness of the timber, the beauty of the stone, the contrast between sunbeams and shadows, patterns of light and patterns of structure – we felt that it was important that the making of a modern museum display did not undermine or compete with the unique qualities of the space.”

Light, both daylight and sunlight, contributes greatly to the quality of the Triforium – however its retention was slightly at odds with the display of light-sensitive objects in the collection. Max Fordham’s London office was challenged with an extensive daylight study of the galleries, which allowed MUMA to locate objects within the space to best suit their light sensitivity. Other daylight light control measures were introduced, such as motorised blinds that are lowered outside of public hours, allowing the daylit experience for visitors to be retained while creating lower light level areas for more sensitive objects.

Peter Fordham, partner at DHA Designs, was responsible for the lighting design from the initial concepts through to its completion this June. The lighting design evolved as new technology became available during the design process, as Fordham explains:

“The lighting design is a traditional track and spot solution, using black lighting tracks fixed to the five-metre high timber ceilings between the deep timber beams, allowing maximum flexibility on site during the commissioning and focusing stages. When we started the project, we were adamant that we wanted to keep the lighting control as simple as possible. We originally proposed small track mounted LED spotlights with built in potentiometers, so that we could set light levels for each fixture as we put them into the track at the end of the project.

“We were really keen to avoid DALI, since we find this protocol slow and clumsy during the commissioning stages of a heritage project, where we are often changing and refining positions of the luminaires on the lighting tracks to suit the final positions of the objects. Using a DALI system, this requires a dedicated programmer to re-address the fixtures every time the fixtures are repositioned on the lighting track. But as the requirements for daylight control became more complicated, a DALI solution was quite difficult to dismiss.”

And then, the eureka moment occurred at Light + Building in 2016, during a whisky tasting event, attended by DHA Designs, on the Mike Stoane Lighting stand. “I had read about Xicato’s XIM Bluetooth modules already, but never really understood what they could do in the museum and gallery environment,” stated Peter Fordham.

“And I’d certainly never seen it in operation before. Mike Stoane’s display had it all: the usual, lockable fixtures that I know and trust from Mike Stoane, plus Xicato’s LEDs delivering quality white light which I could control with ease using my iPhone, plus battery operated PIR and lux sensors hidden into a picture frame that connect via Bluetooth to the LEDs. And the whisky wasn’t bad either!”

Returning to the UK, DHA Designs was tasked with how to introduce Xicato’s Bluetooth modules to the project before a fast approaching tender. With the help of Mike Stoane Lighting and Xicato, DHA Designs arranged on-site mock-ups with fixtures and sensors to demonstrate the quality of light and the new Bluetooth control technology to Westminster Abbey and the design team.

“Using Bluetooth control, we were able to simplify the lighting installation instantly, by providing only non-dimmable power to the lighting track and reducing the extent of cabling. It also saved over £12,000 on a conventional lighting control system.” However, despite the sophistication and ease of controlling the fixtures on an iPhone, the Clerk of Works at Westminster Abbey was adamant to have a single lighting control panel to turn on and off the lights at any time of day or night, without using a smartphone.

One of the limitations of early Bluetooth lighting control was the signal strength between fixtures. Whilst it was easy to control lights in one small area, controlling over two hundred fixtures together as one group from a single location was a more difficult task, particularly when the galleries are spread out across two sides of the Abbey in a horse-shoe shaped plan.

Bluetooth Mesh would overcome these issues easily, but the technology was still in the pipeline as far as Xicato were concerned. But the speed of construction on site could not wait for Mesh to become available. Ultimately, a decision was made to introduce a number of Xicato’s Bluetooth Gateways to sit as a backbone to the system and to ensure that lighting commands could be shared seamlessly between all 250 fixtures.

Mike Stoane Lighting developed a housing that could locate both the Gateways and the PIR and lux sensors in a single ceiling mounted enclosure. Based on a five-metre mounting height, Mike Stoane Lighting was able to map the field of reception for both their sensors and the Gateways, allowing DHA Designs to plot their positions across the galleries to gain complete coverage across the site.

Not all of the lighting specification used Xicato LEDs. A number of the displays were designed with integral lighting, either using Schott’s remote fibre optic lighting, or using LED fixtures inside some of the display cases. For example, the beautiful backlit stained glass displays that sit in front of the circular eight-leafed windows in two of the chapel bays use linear LED strips from KKDC with remote dimmable drivers, while Tryka’s Grazeline LED strips were used in the Architectural Fragments display case. All of these devices needed to be controlled by the Xicato Control application, either by switching on or off, or by dimming using 1-10V. Xicato offered its XIB Intelligent Bridge for each of these units, adding seamless control to their GalaXi Bluetooth lighting control system.

Max Fordham’s extensive daylight analysis of the gallery spaces concluded with a cumulative lux-hour analysis for DHA Designs to work towards. The daylight analysis was consistently updated as more layers of intervention were introduced, in order to maximise the amount of daylight in the space, without compromising on the sensitivity of the objects, or indeed, the visitor experience.

As well as motorised window blinds that operate outside of public hours, manually operated retractable drapes were introduced to shield specific areas from direct sunlight. In other areas, solar film was applied to some of the windows to further reduce daylight levels and UV penetration. In their analysis, Max Fordham’s engineers were able to focus on specific key objects located in the gallery and calculate the annual amount of daylight that an object will receive, expressed in cumulative lux hours. This could then be subtracted from the total allowable lux-hour budget for that object, according to its sensitivity, in order to determine how much artificial light could be added, based on a six-hour day, six days per week.

Throughout the construction period, DHA Designs, along with all other contractors, had to work within the constraints of the operating hours and services that took place at Westminster Abbey. On a daily basis the site had to be cleared by 16:45, before the start of Evensong, which lasted one hour. Other events at the Abbey required high level security searches the day before the event, cutting into valuable programming and commissioning time as the opening date drew closer.

The actual programming of the lighting system took place in two stages: the first allowed DHA Designs to pre-commission all of the Mike Stoane fixtures with a device number and name, so that it can easily be identified by the Xicato Control application after it had been added to the track; once all of the fixtures were in place, the actual light levels and fine tuning could be set, but this could only take place after dark once the levels of daylight had dropped.

“Commissioning a daylit gallery in May and June is never ideal, requiring several late nights on site with Xicato to get things set up” said Fordham. One of the difficulties that Xicato had to overcome was the change in Bluetooth signal strength when the gallery spaces were full of content and large display cases.

Patrick van der Meulen from Xicato was onsite with DHA Designs for the programming and commissioning. “Despite the relatively low signal strength from the Abbey’s Wi-Fi hotspots to our Bluetooth Gateways, the Xicato system allows you to select specific LED modules to work as node points, in the same way that Bluetooth Mesh works”, added van der Meulen.

The system is now up and running, and the galleries have received favorable coverage since their opening. All of the lighting now switches on and off automatically using the PIR sensors across the galleries, and as the daylight levels increase, the spotlights that light onto the more sensitive objects slowly dim down to conserve the lux-hour budget. And, of course, the Clerk of Works did get his touchscreen: a simple Android device that allows a staff member to manually select a lighting scene so that the galleries can be operated and maintained outside of public hours.

Asked whether he would use the same control system again, Fordham was quick to respond. “Absolutely. Xicato has proved that the days of conventional lighting control for museums and galleries are now numbered. And the advantage of using Xicato’s system is that you also get the consistency of colour and flicker free lighting from their LEDs as well as cutting edge lighting control.

“We plan to revisit the lighting again with the Abbey conservators in 6-12 months’ time, once they have collected lux-hour data from their sensors, and to see how we can improve the existing program and functionality of the sensors. In addition, the Abbey have shown interest in using URL beacon function of the Xicato LEDs in a future visitor experience smartphone application.”

But for the time being, you can enjoy the sunbeams and shadows.

🔥🔥🔥 The sensational cover image for arc #

The latest artwork from Liz West has been unveiled

The winners of the first ever Women in Lighting Aw

BREAKING NEWS - Hot off the heels of last month’

Happy International Day of Light to all the lovers

"We wield light to transform spaces" Founded by W

"When you see other women achieve and overcome adv

Winner of ‘Best of the Best’ [d]arc award (pro