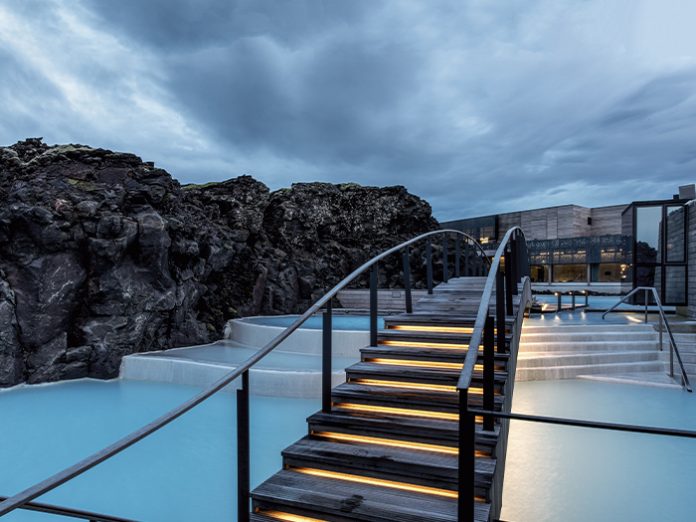 These three concepts, intended to establish a hierarchy and sequence throughout a space, to evoke a relaxing atmosphere and to stimulate the body and spirit with the interplay of light and shadow, have been captured beautifully at the Retreat at Blue Lagoon, a new resort opened at the stunning Blue Lagoon geothermal spa in Iceland.

Designed by Basalt Architects, the Blue Lagoon was named one of the 25 wonders of the world by National Geographic in 2012, and since its opening it has promoted the benefits of geothermal seawater for health and wellbeing.

Continuing this promotion, the Retreat features a subterranean spa carved into the volcanic earth, a terraced geothermal lagoon, a restaurant intended to reinvent Iceland’s culinary heritage, and 62 elegant guest suites, surrounded by the area’s stunning mineral-rich landscape, therefore bringing mind and body into harmony with nature through a journey of relaxation, rejuvenation and exploration.

Because of the beauty of the surrounding environment, a large emphasis was placed on the balance between the natural and the artificial, the buildings and the nature, the indoors and outdoors. With architectural designs that include an abundance of full height windows to connect the interior and the exterior, and the integration of naturally formed lava walls throughout the site, the Retreat is firmly placed within its beautiful surroundings.

Guðjón L. Sigurðsson of Liska has worked alongside Basalt on the Blue Lagoon since the very beginning. He explained: “Lighting was part of the design conversation from project initiation. Basalt Architects’ design emphasis was on the interaction of modern technology and nature.

“Views into the natural lava fields, the lagoon and the sky were crucial. The architecture is mainly comprised of full height windows, except at the spa and wine cellar, all other areas within the Retreat afford a distinctive view of the outside.”

The central idea of the lighting design was to introduce an elevated and intimate approach to hospitality. A holistic approach was employed, unique to the overarching architectural directive, to bring shape and clarity to the nuanced spatial composition.

This spatial composition is one that, intentionally or not, changed and developed as the project progressed, as Sigurðsson explained: “The Retreat sits deep in the lava, as envisioned by Basalt, to allow the lava formations to mark the perimeter of the lagoon, also forming interior walls of the Spa,” he said.

“We were faced with unforeseen situations uncovered by digging into the lava, but the design followed suit. The wine cellar that sits deep underground wasn’t originally planned for, but only after a massive hole was unearthed while the lava was being dredged up, it was then decided to create a cellar surrounded by the natural lava walls.”

When working on unpredictable grounds such as this, such improvisation may be expected, and while the lighting concept remained constant throughout, Sigurðsson revealed there was a great deal of making things up on the spot. “Even with a firm concept, the design was more or less accomplished on the fly,” he said.

“Almost every aspect of the design was dependent on the lava formation, and how well we could nestle in the Retreat. Nature was given much emphasis. The lighting concept, and the architectural directive, was to underscore the interaction between man-made elements and nature. We only wanted to illuminate the man-made architectural structures and interior elements, leaving the natural lava walls untouched.”

However, at the base of the wine cellar, Liska installed iGuzzini’s LineaLuce fixtures at the perimeter of the walls to showcase the natural iridescent colour of the rocks.”

Such interaction can be also be found in the Moss Restaurant, where interior design consultants Design Group Italia (DGI) designed a large-scale ornamental chandelier above the Chef’s table, comprising 106 individually controllable OLED panels, designed to resemble the multifaceted, columnar structure of volcanic rocks.

Despite the improvisatory nature of some of the spaces, Sigurðsson explained that Liska had a “clear vision on the architectural lighting and overall choreography,” working alongside DGI throughout the project. This was particularly pertinent in the blend between architectural and decorative lighting fixtures.

“It was vital for us to support and fulfil Basalt’s design directive while working our way through our design endeavours,” said Sigurðsson. “The overall lighting (architectural and decorative) was designed to fit our concept, envisioned in collaboration with DGI. The decorative fixtures were decided by DGI – we at Liska peer reviewed their selection for lighting quality and technical aspects.

“We collaborated closely with DGI and Basalt on the decorative elements, their placement and integration within the space to attain a balanced choreography throughout the project.”

Even with the various decorative and architectural elements, light levels throughout the Retreat are carefully controlled and balanced, taking into consideration the amount and availability of natural light.

All lighting products specified allow for a superior level of comfort, meeting the functional requirements, while at the same time creating a mood and atmosphere for guests to relax and rejuvenate. This has been achieved through the use of indirect, soft and diffused lighting, which serves to reveal the essence of materials, and their delicate textures, while providing an emphasis on the architectural volume.

Liska called on iGuzzini for the majority of the architectural fixtures, with the Italian manufacturer’s Laser Blade providing general lighting at the foyer and restaurant areas, while its Underscore provides a gentle, integrated linear light in the corridors, restrooms and showers, as well as illuminating outdoor steps. Elsewhere, iGuzzini’s Trick was used in window thresholds, and to provide a grazed lighting effect at the lagoon, alongside exterior pathway lighting, installed at the bottom of bollards to graze the motorway and highlight the lava walls that follow the motorway.

Hierarchy is achieved through precise control of light and carefully choreographed light levels. By punctuating carefully controlled lighting, visual contrast was achieved wherever desired. Throughout the spa, lighting was carefully employed to avoid any direct light on guests.

In the guest rooms, biodynamic lighting was employed through the use of iGuzzini’s SoleLuna fixtures, which were especially designed to meet the wellbeing aspect, while achieving all other functional aspects of lighting within the suites.

“We conducted innumerable tests and mock-ups to assess the installation and the appearance, in addition to the lighting quality, visual comfort and controls possibility,” said Sigurðsson. “During one of these tests, the installation was finally settled after a circular luminaire was inserted behind a Clipso membrane. We wanted to achieve a sharp, illuminated edge around the fixture, as well as soft penumbra as perceived around the sun on a cloudy day, in addition to making the fixture completely disappear into the ceiling.”

The fixture was also custom-designed to replicate the effect of the sun and the moon with a faint, diffused halo around it. Programmed to reproduce various phases of the day and night, along with the dark shadows that are perceived on the moon’s surface.

“The guests are afforded the flexibility to tune the light levels and colour temperature of the light, and are able to activate different lighting atmospheres from the keypad installed near the bedhead. A wake up call can also be set to gently and gradually wake up guests with light, not sound,” continued Sigurðsson.

Creating lighting that is beneficial for health and wellbeing was paramount to Sigurðsson and Liska, and he explained that, in a previous project at the Blue Lagoon, he had done some research into this area to find the most beneficial lighting conditions.

“One of the projects at the Blue Lagoon was the medical centre that I designed the lighting for. This centre is mainly for people with skin disease,” he said. “We conducted subjective assessment on the patients’ preference for colour temperature and CRI. From this test we were able to deduce that more warmer colour temperatures were much relief to the patients’ psychological wellbeing, as their skin appeared healthier, not pale or sickness stricken. We specified 2200K cold cathode fixtures back then.

“Here at the Retreat, we have therefore specified fixtures with higher R9 values to allow for better rendering of skin tones. Most light fixtures are warm dim as well. The lighting is designed so that the guests are able to see their surrounds but are not directly illuminated.”

The role of lighting on health and wellbeing is well established, and is something that has been discussed in previous issues of arc. Nowhere is this more apparent than in countries such as Iceland, that feature long summer days with 24 hours of daylight, and the exact opposite in the winter. Such drastic weather conditions meant that special measures had to be taken in the lighting design.

“As many of us are aware of Iceland’s long summer days, we wanted to attain complete darkness in the guest rooms, blocking out any natural light permeating into the rooms, and no indicator lights from appliances that would disrupt guests’ sleep. While in the case of those who suffer from Seasonal Affective Disorder, they can have artificial daylight in the rooms when It is dark out during the long winter nights of Iceland.

“First and foremost though, visibility and visual comfort were important considerations, as on most projects. The balanced interplay between daylighting and electric lighting, between quantitative use of light and its distribution, its interspatial relationship and colour temperature of lighting were some of the major lighting considerations at the Retreat.”

Although technology was used to facilitate the design intentions throughout the Retreat, the concept was to establish a seamless connection, and to integrate the elements of the design with nature, human biology and architecture, therefore creating sublime, experiential spaces where lighting and architecture are conceived as one and the same.

This, Sigurðsson feels, comes through the overall use of subtle and minimalistic lighting, while not compromising on functional aspects. “With architecturally concealed light fixtures, working with colour temperature of light as opposed to colours, and careful integration of natural and electric lighting to preserve the quality of light, with light underlining the architectural planes and interior elements, utilising concentrated cones of light to create drama while avoiding lighting up the ceiling planes, we were able to create a cozy and intimate ambiance.”

Richard Kelly’s three concepts have become a common mantra for lighting designers around the world, and for good reason. When effectively implemented, they can create beautiful, inspiring environments, and this is perfectly highlighted at the Retreat at Blue Lagoon, with its subtle yet moving lighting scheme that greatly contributes to the resort’s feeling of relaxation and rejuvenation, health and wellbeing.