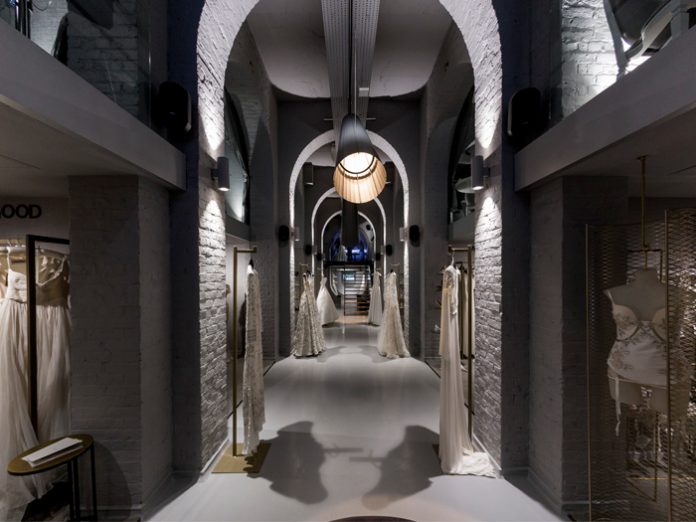 For betrothed couples looking for a one-stop shop for their wedding planning needs, the Wedding Gallery at One Marylebone is the perfect location.

Located in a repurposed Anglican cathedral – formerly Holy Trinity Church – on Marylebone Road in central London, The Wedding Gallery provides a wealth of luxury retail establishments and wedding planning services, alongside a 400-capacity venue, all under one roof.

The 20,000sqft Wedding Gallery covers every detail needed for a wedding, from hair and make up, gowns, jewellery and suits to photographers, flowers and wedding stationary. The store also offers cakes and catering, with an on-site kitchen for taste tests.

Couples can also hire DJs and speechwriters, or visit the ‘hub’, where they can put on headphones and watch wedding singers and bands on a big screen to book musicians.

To make sure that no details are missed, wedding planners are on hand to provide advice, while insurance packages are also offered for worst-case scenarios in case one partner has a last-minute change of heart.

Perhaps more impressive than what is inside the Wedding Gallery is the building’s beautiful, neo-classical inspired architecture. Built in 1828 to the design of Sir John Soane to celebrate the defeat of Napoleon, the building boasts a grand portico and belfry tower.

The Grade-I listed building could be seen as being imposing, but the owners sought to use the facility’s impressive architecture to create an inviting environment both inside and out, especially at night.

The Wedding Gallery wanted the building’s architectural lighting to creatively provide upmost emphasis on the surroundings, with the ability to control the various areas using a touch-screen controller to maximise the usability. As such, they contacted Essex-based ErosPhos and EPS Lighting to design and supply the lighting respectively.

“Lighting had to be efficient, cost-effective and easy to install,” said Russell Vanstone, Technical Director at ErosPhos. “EPS used the light fixtures’ photometry to create a rendering based on the product’s performance, not an artistic representation. This allowed us to correctly specify and present the solution to the client, ensuring the end result is as expected.”

The exterior lighting was intended to serve two purposes; general illumination, but also as part of a rental package for events held on site. Because of this, EPS provided the ability to override the automatic controls. It also included a DMX input for a theatrical lighting desk, allowing event users to control façade lighting for different kinds of events. Based on these criteria, ErosPhos specified high-output, exterior-rated LED fixtures from Acclaim Lighting.

ErosPhos’ lighting specifications consisted of forward and side-facing flood fixtures, inclusive of lighting on the roof. Those lights include a combination of flood and linear grazing.

“The client initially wanted an ‘all white’ install, but through demos and mock-ups we managed to show that colour was indeed the best way forward,” explained Vanstone.

“We had to ensure that the building didn’t look like an animation from a cartoon, which unfortunately can happen when a building is lit in colour if the design isn’t done correctly, but the feedback from everyone is that the building has never looked better.”

“The creativity of the design and the use of colours has satisfied the client and the visitors of the event space,” Vanstone continued. “The lighting versatility, the simplicity and the output of the system greatly justifies the investment. Now, when visitors go to the old church, their wedding journey starts with a beautiful experience through colour that hopefully continues throughout their lives.”

Initially just brought in to provide lighting for the building’s exterior, ErosPhos were also asked to look at the interior of the building as well, and after putting together a design for this, they consulted with the client’s in-house construction team.

Inside the church, the many retailers are located throughout weaving tunnels and catacombs, adding a sense of exploration and playful, maze-like quality for guests as they navigate their way around the facility. However, such an unusual layout meant that there was a total lack of any natural light.

As such, it was essential that the lighting scheme developed by ErosPhos was fit for purpose. As with the exterior, Vanstone and his team provided design renders and mock-ups to make sure that what they were proposing would work, and also worked closely with interior designer Christian Lahoude to ensure that the lighting designs really maximised the architectural designs.

“We had to ensure that we specified the correct function and emergency lighting, which not only complied fully with the BSEN standards for emergency lighting and general illumination levels, such as that on stairs, we also met the design requirements and catered for the fact that this is indeed a very high-end retail environment,” Vanstone continued.

Lighting for the interior also came from Acclaim Lighting, alongside Nobile Italia and Hadler. Because of the building’s Grade-I listed status, ErosPhos were not able to make any structural changes to the building, nor damage the exterior façade. As such, all products were fitted using construction glues, and where actual fixings were required, these were done so using fixings that won’t damage the fabric of the building. The same applied for the building’s interior, where cable trays and recessed ceilings were used throughout.

Aimed at being a one-stop shop for couples looking for a luxury wedding, it was important that the Wedding Gallery had a lighting scheme to match the high-end luxury of its retail establishments. The design provided by ErosPhos complements not only the fine goods on display, but also the ornate architecture of this impressive building, adding to the already magical wedding experience and aiding in creating those special memories.