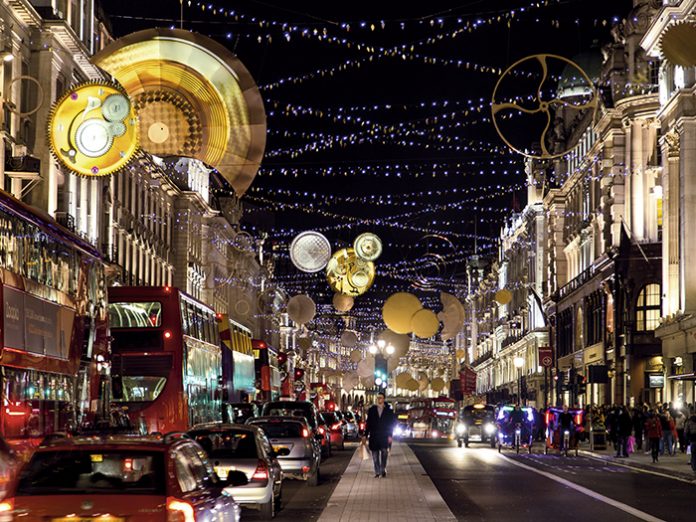 A London Christmas premiere for 2015, ‘Timeless Elegance’ is an immersive light art installation designed by ACT Lighting Design illustrating the concept of  the suspension of time.

The first edition of Timeless Elegance, a light art installation signed by ACT Lighting Design’s creative team, marked the beginning of the 2015 Christmas season on the prestigious Regent Street in London.The Philharmonic Orchestra, conducted by Nicholas Dodd, played a musical piece by Pierre Mussche from Musicom, which was composed specially for the occasion.

On the hour, every hour, visitors were treated to an exclusive compilation of video projections and programmed lights that brought the sculpture to life. This ambitious dynamic installation was designed to evolve in time to reflect the brand values of Regent Street and convey its atmosphere of glamour during the festive period.

ACT Lighting Design’s concept was a sculpture of time – nowadays a genuine luxury. The lighting team illustrated the concept of ‘suspension of time;’ by showing each element of an enchanting innovative clockwork mechanism, which paved a suspended ‘golden way’ for the visitors. The proposal was to rediscover the festive season of Christmas with a new artistic perspective and a touch of avant-garde.

For the first time in London’s festive illuminations, ACT Lighting Design imagined a challenging lighting scheme with a custom created combination of video projections, dynamic pixels, tinsels of light and LED screens integrated into the decoration. The installation consisted of five distinctive decorative compositions placed at 9-10m high on the straight crossovers and repeated randomly all along Regent Street (800m x 25m) in intervals of approximately 50m.

Each composition included a series of 24 elements as an interpretation of the clockwork pieces. These elements, made of metal, were scattered along the street with a systematic application of basic and special elements together with connection pieces. In order to obtain the most appealing look during the day and various visual effects by night, each of those elements differed in style, surfaces and specific colour codes (yellow, rose gold and lead metal).

In addition to the compositions, and especially in the diagonal crossovers, tinsels of light with small glitter diamond shapes (approximately 100mm x 200mm spaced every half metre) filled the atmosphere moving freely in the breeze and reflecting the light rays, further creating a golden immersion.

The lighting scheme was based on a combination of video projections, dynamic pixels, tinsels of light and LED screens integrated into the decoration. The largest elements of the composition served as the projection surface for the scenography and unique video content.

Custom-created video animations were projected in a loop during the evening hours, featuring crystallised textures and engraved textures of the watches and gift boxes with Christmas greetings. Each hour, visitors could discover the main attraction of a tailored spectacle featuring an exclusive compilation of video projections and programmed lights. Five different video storyboards enhanced the structure with visual and lighting effects.

All visual elements (video projections, LED RGB lines, LED pixels and the custom LED screens) were controlled by DMX and Artnet. A fibre optic gigabit ring network was implemented to program, control and monitor all the lighting and video elements. The light art installation and its main spectacle was on show until 4 January.