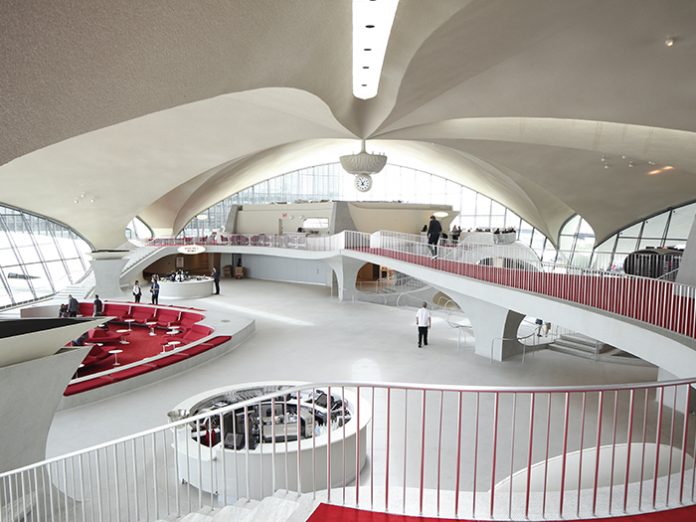 One Lux Studio transforms the iconic TWA Flight Centre into a glamorous hotel lobby with updated fixtures from Spectrum Lighting.

The former airport lounge was designed by mid-century architectural icon Eero Saarinen in 1958, and was used as an iconic backdrop in multiple Hollywood films, most notably in the cinematic Catch me if You Can.

The flight centre closed its doors in 2001 after Trans World Airlines went bankrupt, and it wasn’t until early 2017 that One Lux was brought on board to help complete its renovation into a hotel lobby.

Jack Bailey, Partner at One Lux Studio explained the studio’s initial involvement with the project: “We started work in the Spring of 2017 and the interior lighting was completed in the fall of 2019, with the exterior floodlighting still in progress. The design brief was to use lighting to transform an early 60s airport terminal into a hotel lobby without altering its authentic appearance. With a faithful architectural restoration, lighting presented the greatest opportunity to transform the character of the space after dark.

“A hotel lobby has a much different character than an airport terminal – it requires warm, dim lighting, contrasts and highlights. These attributes are not ordinarily found in airport terminals.”

The team at One Lux worked closely with Spectrum Lighting to complete the new lighting scheme for the lobby that replaced the original fixtures from the 1960s with like-for-like modern updates. “All of the visible functions are custom-manufactured to match the appearance (though not always the function) of the originally installed lighting,” explained Bailey.

“Spectrum produced three different custom fixtures. One of these was replicated from existing fixtures, one was a reproduction based on original photos, and the third was a new design to mount at existing locations. In all three cases, the performance of the light was determined based on the present needs of the space, rather than the original lighting characteristics.”

The eyeball, cylinder and spotlight fixtures blend modern LED components and high-tech controls with original mid-century lighting designs. Due to the ceiling being the underside of the concrete roof, it was impossible to introduce new lighting positions, so the fixtures had to be replaced in the exact same locations.

“The irony of being a 21st century lighting designer for a futuristic building from the middle of the 20th century is clear to me,” explained Bailey. “We can do things they wouldn’t have been able to imagine, and yet at times it seems like they did. Lighting positions are just where we need them and drive us towards the inevitable solutions that Saarinen had determined for us 60 years ago.

Spectrum Lighting installed four rows of custom deep recessed cylinder fixtures that line the skylight over the lobby, and clusters of louvered eyeball fixtures light the seating areas throughout the space. The fixtures can all be controlled via Bluetooth, connected to an ETC dimming system.

“There were practical constraints associated with working in a landmarked interior, and especially in this project, where the ability to add lighting at new positions is almost non-existent. In some cases, we were required to not just re-use existing positions, but also to re-use existing 60-year old wiring,” added Bailey.

The teams successfully completed their brief of modernising the original TWA terminal into an atmospheric, relaxing and glamorous hotel lobby that evokes an authentic period of recreation and 1960s glamour.

“You are transported to that place and time as you walk through the doors after dark. It is the lighting that gives the building a warmth in the evening,” he reflected.

“The building is exceptional in almost every way. It is a masterwork by one of the greatest architects of the 20th century. Everything about it, including the lighting, was custom-designed in pursuit of Saarinen’s vision. Given the extensive modifications to the lighting that have occurred over the years, one of the greatest challenges was understanding the architect’s original vision, and how it could be re-interpreted for the new hotel.”