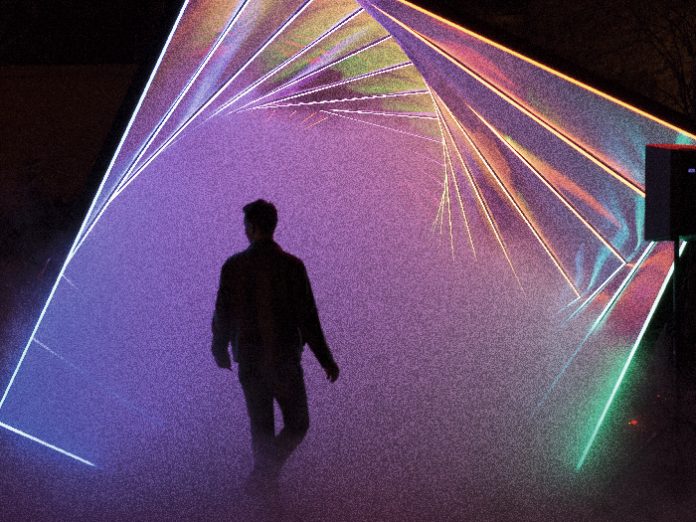 Unveiled at the debut Zagreb Festival of Lights, held in the Croatian capital in March this year, Dean Skira and his team of designers at Skira created a special lighting installation, entitled Twisted.

Designed as a site-specific object, Twisted is a 30-metre long pavilion for visitors to walk through that ‘experiments with people’s perception of movement and their sense of space’.

Skira has plenty of experience in this type of installation, having already created the Hooked Up tunnel, a gradually narrowing pavilion that created a spatial light experience for viewers as they walked through it, in collaboration with iGuzzini for Milan Design Week in 2013.

“It seems I enjoy the idea of people walking through a structure surrounded by light,” he joked.

“I was invited by the organisers to create a site specific lighting installation for their first festival,” Skira said, explaining how the project came about. “The space was quite large and void, I had two completely different ideas how to connect these lighting objects to the space, but in the end, Twisted was more interactive, and this was more important for the program.”

Carefully planned and discussed with contractors throughout the entire creative process, the pavilion is made of black painted steel and white lexan polycarbonate. Constructed in sections in order to be assembled and dismantled with ease, the art object can be moved and placed on squares, or anywhere suitable for an object of its size.

Illuminated by RGB Klus lines that are integrated into the supporting structure, the lighting is controlled with DMX Nicolaudie protocol, meaning that the lighting scheme can be programmed to a variety of lighting scenarios. Smoke machines’ create extra ambiance, filling the pavilion with a ‘fog’ that Skira believes adds to the experience. “The lighting, the unusual architectural shape of the object, the sound and the fog effect are the key elements that influence the spatial orientation, making this walk a unique experience,” he said.

The pavilion was open to the public for three days across Zagreb Festival of Lights, from 16-19 March, attracting a large number of visitors. Skira explained: “The dazzling light attracted the visitors and during several festival nights, thousands of people passed through the pavilion.

“Children loved it, the colours and the haze, people took selfies and photos, discussing the effects, the reactions were very positive.”

And the success of the installation has led to Twisted going on the road, with several other events showing an interest and adding it to their program.

“The tourist board in Pula added it to their program for an event in September, while another lighting festival in Italy has invited us in November,” Skira said. “It seems that it will be on the road a lot, and I like that lots of different people around the globe will have fun with it.”

Alongside the success of the installation at Zagreb Festival of Lights, and the subsequent interest from other lighting events, Twisted came in first place in the darc awards / architectural ART: High budget category, and Skira is delighted with the response that it has received: “Twisted was a kind of experimental attempt to influence the public by stimulating their senses and making them question their perception and feeling of space at the same time,” he said.

“Yes, I was very satisfied, it really turned out as I imagined and it was all worth it.”

Of the award win, he added: “Twisted ideas get original awards like this one!

“It was an honour to receive the darc award in this artistic category, and it means a lot to me and my team to know that the industry has recognised our unusual project and the joy that it brings to the audience.”