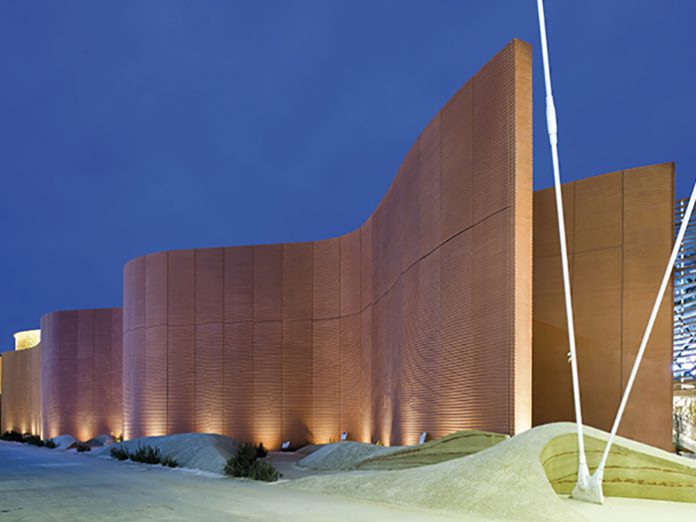 Bringing the planning principles of the traditional desert city to Milan, the UAE pavilion’s interior of self-shaded streets evokes the experience of the the country’s ancient communities, while demonstrating the natural energy efficiency of their compact urban form. Foster + Partners and Land Design Studio (Visitor Experience Designers) required a varying lighting design approach which had to cover several different disciplines from architectural and landscape to theatrical lighting. With extensive experience in theatre and architectural lighting DALD helped create a sympathetic synergy between the architecture and the visitor experience.

The pavilion occupies a large site close to the centre of the Expo and is accessed via its main circulation axis, the Decumanus. From here, visitors are drawn into the mouth of a canyon-like ramp space, defined by two undulating 12-metre-high (GRC) walls. The high walls continue through the 140-metre site in a series of parallel waves, unifying the visitor spaces within a dynamic formal language designed to convey the ridges and texture of sand dunes.

After extensive lighting trials with samples of the GRC wall material, adjustable buried lighting fixtures fitted with 2,700K LED, light straw filters and spreader lenses were chosen to up light the walls, which subtly create soft warm brush strokes of light across the undulating surface complementing the wall pigment. Within the central ramp, as a part of the visitor experience, dynamic interactive displays housed within cubes are supported by glass fins which feature a dot manifestation, which is edge illuminated, creating an interesting ethereal contrast between the spine of the ramp and the walls.

As the ramp weaves a path, small custom designed buried fixtures fitted with a 2,700K LED and diffusion film up light the walls at the pinch points, effectively creating an interesting perspective vista at night through the canyon-like space. At the top of the ramp a large drum houses a state-of-the-art auditorium and interactive post show space.

The external lighting of the drum plays an important part in creating a dramatic focal point to the pavilion. Extensive lighting trials took place in Italy with Foster + Partners to establish what cladding material and light source should be used for the exterior of the drum – a Gold Tecu material was chosen along with a high output linear LED strip fitted with an amber filter. The LED strips are positioned at the top of the drum, which uniformly graze the Tecu material, without creating any glare issues. The light in turn reflects off the drum and onto the surrounding GRC walls and perimeter staircase, creating an ambient depth. Within the drum is an auditorium, with a 360º perimeter screen. As the creative design team required the space to be more than just a cinema, but also an immersive experience. DALD chose to use a combination of automated LED wash lights and spots.

The automated lighting fixtures are positioned off a large circular truss, which allows for multiple lighting positions for illumination of the perimeter screens, suspended casement roof and the tiered audience seating block. The perimeter staircases are edge illuminated by custom lengths of LED strip set within an extrusion.

After the screening of the film, the visitors enter the post show space, which features a large holographic experience. As with the auditorium, automated lighting is used, which helps to add to the immersive quality of the space. On exiting the post show space the visitors move to the external ‘Oasis’ area, linking the first floor level with the ground floor. The ‘Oasis’ features desert flora planting as well as two large palm trees. By night the space is lit by a combination of sources, which includes the projection of dappled palm leaves and low level accent spots set behind planting, creating a sense of intimacy within the ‘Oasis’. Influenced by ancient planning principles, the pavilion’s interior evokes the narrow pedestrian streets and courtyards of the traditional desert city, and its contemporary reinterpretation in the sustainable Masdar masterplan.

The first floor level features an exhibition of cultural objects, discretely lit by small linear fittings recessed up between dark slatted ceilings that are almost invisible off axis and a detail which is used throughout the pavilion. A 3000K LED source was chosen to compliment the interior terracotta wall colour. All the curved staircases throughout the pavilion are illuminated by custom designed side emitting diffused LED strips set within the handrail, which when viewed from below appears homogenous.

An exhibition on the ground floor of the main drum celebrates Dubai as host city for the 2020 Expo and is lit by a selection of RGB and single colour LED fittings to graphics and design detail. Although the Pavilion is large the lighting design approach is minimalistic stretching the light sources to their maximum potential.

The UAE’s National Media Council assembled a world-class team to deliver an unforgettable pavilion experience, not only producing a building design that ‘wows’ visitors but also satisfies the requirement for the pavilion to be environmentally friendly. The use of LED technology is now a given but the pavilion goes several steps further. The design of the pavilion follows the principles of LEED with a combination of passive and active techniques. Most significantly, the building is designed to be recycled and rebuilt in the UAE after the Expo.