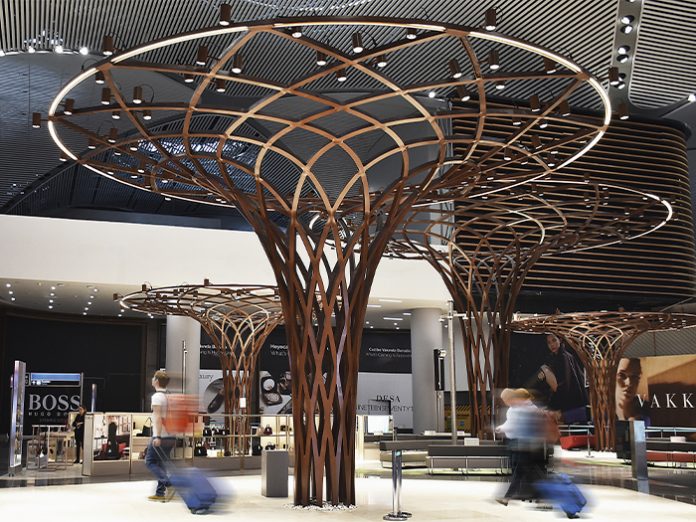 Istanbul Airport, located in the heart of Asia, Europe, and the Middle East, is shaping up to be the world’s highest capacity airport. Overall, it has the potential of welcoming up to 200 million passengers yearly by 2023, travelling to 300 different destinations.

The first phase was completed and opened in October 2018, and hopes to welcome 90 million passengers annually. This presents a huge retail opportunity, not missed by Tabanlıoğlu architects, which has drawn on the architecture of Istanbul as inspiration for the 26 Unifree duty-free shops with twelve different concept designs. These various cultural concepts and symbols include the Bosphorous, Grand Bazaar, and the famous Judas trees that populate the city, whose pink blossoms line the city streets from spring.

This architecturally-inspired design was curated in conjunction with ZKLD studio, responsible for the lighting design, and therefore responsible for drawing attention to these features. Speaking to arc, Mustafa Akkaya, Design Director and Senior Lighting Designer at ZKLD, said: “The architectural team had an idea map in the context of the concept, inspired by the dynamic structure of the Bosphorus. The client gave feedback about the lighting levels that would be eye-catching, drawing from their previous experience.” These directed lights were used to foster a sense of luxury, eye-catching design and visual comfort, as well as draw further attention to other design aspects, such as the abstract tree structures littered through the circulation areas.

“Architectural forms and elements are based on the abstraction of the concept of Istanbul, and in this context, the forms of all lighting instruments in which we take part in the design represent different elements that will complete this scene of Istanbul,” Akkaya continued. For the abstract tree structures, a linear LED line with an opal cover had been custom-made to suit these focal points. During this design process, special products such as telescopic rail spot arms and mounting brackets were also developed.

Fundamentally, the goal of the lighting design was to create an attractive atmosphere through the emphasis of architectural details and the duty-free stores. This would be aided through DMX controlled RGBW and 3000K linear LED fixtures from Osram and Arlight, alongside various façade lightings.

Interior areas were divided through general and focal areas: Unifree requested a standard 1/5 ratio for illuminance levels, in order to create a visual contrast and attract attention to the desired places. For this reason, the vertical illumination of gondolas is set  to 1500 lux on average, whilst in general spaces, such as circulation areas, this is reduced to around 300 lux. In order to keep things comfortable and eye-catching, ZKLD developed product-oriented lighting solutions, and used the same warm white light temperature to gather all areas under one roof and create an overall sense of synergy and unity of design within the duty-free stores. This also allowed for ZKLD to counter aspect the clinical and homogenous nature of airport spaces. Akkaya continued: “Our aim was to bring forward the stores with warmer colours of light on the products in this overall white airport volume.” For general lighting, a homogeneous light distribution was used; this included custom-made 3000K suspended lighting fixtures with line textured opal diffusers, courtesy of TLTpanel. These were designed and used in almost every store at cashier points.

The whole project required a rapid flow of action, which required a great deal of co-operation and communication. Akkaya described his experience of the process: “Throughout the process, conceptual ideas have changed slightly during the construction phase. By keeping interdisciplinary communication constantly active, the variables were quickly adapted… At the point of solution, it required a product-oriented lighting scheme for the illumination of all these organic-form architectural elements.”

Throughout the project, ZKLD took part in the designs, brainstorms and the mock-ups, maintaining a high level of participation and exchange of ideas. For example, flexible light directions were implemented to accommodate for the potential last minute changes in furnishings, whilst a shadow-free display area had also been supplied with Zumtobel’s Onico adjustable track spots at a twelve-degree beam angle.

Besides its ambition to become the highest capacity airport, Istanbul Airport’s architecture aims to make a name for itself. For the duty-free shops of the airport, they remain the most common but arguably also the most attractive areas of the project. ZKLD kept the centrality of retail in mind from the outset, using light design to outline and accentuate these areas. Akkaya said, in closing: “It is a great pleasure to see that the targeted fiction has been realised after the completion of all the processes of the project. Of course, in the construction of such large-scale projects, there will be factors that will affect the outcome, but each step followed one by one has allowed us to minimise this.” With the help of lighting design that highlights the architecture, bold and eye-catching ambiances have been created for the passengers of a new world transport hub.