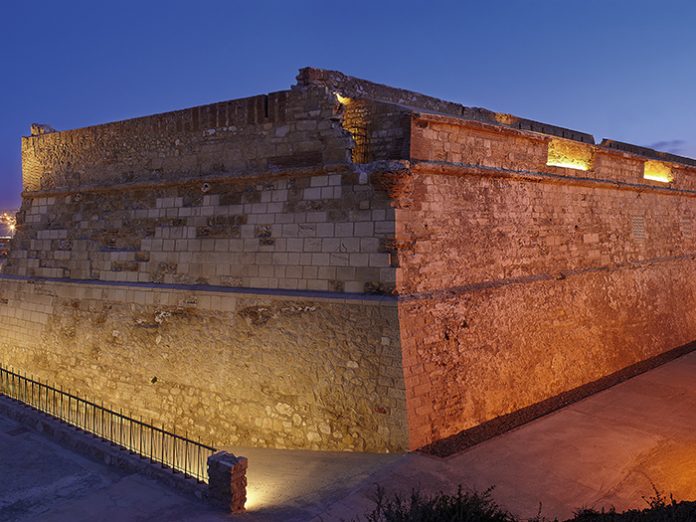 The history of Victoria Grande Fort is a vivid one. Originally built to keep people out, it then found itself used as a space to keep people in. Later turning to ruins, it was the job of DCI lighting practice to enhance the restoration work taking place by Chacel 8 Architecture and its team through subtle, unobtrusive design.

Built in 1736 by military engineer Juan Martin Zermeño, the Victoria Grande Fortress in Melilla, a Spanish city in North Africa, was originally designed as a defence fort. Following this, it was used as a prison before becoming derelict through lack of use; today the ruins are open to the public and serve to form the identity of Melilla.

Working as part of a restoration team headed up by architect D. Jose Antonio Fernandez of Chacel 8 Architecture, DCI lighting practice was asked to take responsibility for new architectural lighting that would help to tell the story of the ruins’ history and charm.

The architectural lighting design is the result of carefully applied LED technology in terms of its integration into the architecture – the luminaires disappear, become transparent even, so as to not interfere with the visual enjoyment of the space. Two distinct works take place in the space – one, when the natural light is present and the architecture itself perfectly tells the history of the ruins, and another when natural light fades and gives way to the creation of a theatrical atmosphere, accompanying the visitor along their journey through the ruins with a continuous play of light and shadows. A number of imaginative linear lighting solutions have been implemented – sometimes they fly under the vaults, drawing swift lines that uplight the ceilings, or create a play of dramatic backlights in the stone blinds when observed from outside the walls of the fortress.

Around the perimeter, the lighting is integrated into the moats – washing the walls with a play of colour temperatures, recreating the fire glows and blending smoothly up the vertical plane. The light variations in colour temperature achieve a pictorial effect and the accents punctuate the reading of the whole façade. On the side walls the battlements are shaped vertically by light, giving order and rhythm to the image of the fortress, with its volume clearly outlined.

One of the biggest challenges with this project came with its age. In the eighteenth century there was no artificial lighting but the ruins’ story in the present day was to be told through the help of artificial lighting. According to Javier Gorriz of DCI, this was solved by playing with light, shadows and carefully hiding the different light sources from the visitors. Traditional light sources from the time such as the oil lamp have also been recreated, uniquely designed through a collaboration between Chacel 8, DCI and Ilumarte Lighting Systems. The Candle VGMelilla is composed of a printed circuit board with three LEDs of different colour temperatures, controlled by a ZigBee RF module. Spread around the grounds there are 110 units with individual manual control.

Structurally, the main challenge – as with all restoration work – related to the minimal amount of space, both visually and to house the infrastructure for the various electric lighting and communication equipment supplies.

“For us, the key to this lighting project is how the light is able to tell the story,” said Gorriz. “It captivates the eye of the beholder, transforming the different space when natural light fades and the magic takes over through artificial lighting.”

Constant lighting tests during the implementation phase and the KNX control system enabled DCI to adapt the reality originally captured in the original project. “We feel that the lighting design transports visitors to another time, subtly directing their attention to the story we want to tell,” said Gorriz.

Commenting on the project’s stand out features, Gorriz told mondo*arc: “This was one of my first projects of relevance and it has marked a significant moment in my career. The architect and project manager D. Jose Antonio Fernandez, along with the Department of Development of the autonomous city of Melilla, knew perfectly how to transfer their passion for the projext on to each member of the multidisciplinary team.”

Through a keen interest, care and consideration the fortress has been returned to the city of Melilla to tell the story of its history, albeit from a different view point.”