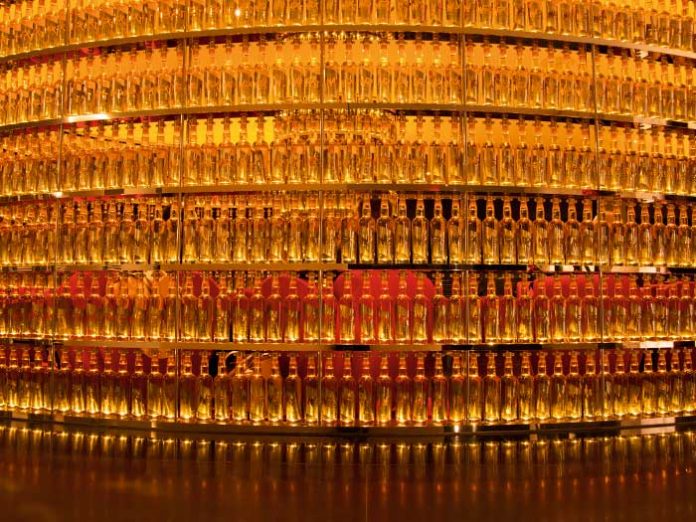 When the notorious Watergate Hotel underwent a much-needed facelift, the owners turned to Ron Arad Architecture, BBGM and CM Kling + Associates Architectural Lighting Design to carry out the renovations, transforming the establishment into a loving homage to its original 1960s design.

The Watergate Hotel, best known for the infamous ‘Watergate Scandal’ that led to the resignation of US President Richard Nixon in 1974, has undergone a major architectural refit.

Originally designed by Italian architect Luigi Moretti between 1960-65, the Watergate Hotel is a major component in a mixed-use, self-contained complex that includes apartment buildings, offices, extensive commercial facilities, and the hotel itself. The building is the only example of Moretti’s work in the US and is listed as a national monument.

The refurbishment, carried out by London-based Ron Arad Architects and BBGM, with CM Kling + Associates Architectural Lighting Design, pays tribute to Moretti’s design, with its curvilinear forms and clean, modernist palette of white plaster and marble, capturing the aesthetic of the era in which the establishment gained its notoriety.

The refit was carried out across the hotel’s ground and below-ground floors, encompassing the entrance foyer and hotel lobby, library, restaurant, bar, dining terrace and main elevator lobby. A breath-taking reimagining of the whisky bar takes centre stage, with the introduction of a new floor-to-ceiling curved wall made up of 2,450 whisky bottles. The whisky wall’s frame incorporates individual Vissa uplights from Linea Light Group underneath each bottle, casting the bar in a rich, amber light.

This – according to David Ghatan, CM Kling President – made the whisky bar a ‘once in a lifetime design’, describing it as a ‘chandelier for the entire lobby’. Ghatan said: “The whisky wall glows, casting warm light into both the bar and the lobby – it’s a stunning feature on its own. But the most intriguing part about the wall is the subtle glimpses of the people and objects on the other side.”

Repeating motifs are expressed continuously throughout the remodelling, through the use of curved, tubular bronze-patinated brass, polished copper and stainless steel, accompanied by sweeping oak-lined walls, while the rich palette of metal and timber fashions and re-arranges the route through the building, opening up a fluid sequence of spaces, while the lighting illuminates the way.

Custom-designed rugs and richly upholstered furniture adorn the lobby area, while black granite floors and plastered ceilings are articulated in a playful pattern of polished curves, helping to perpetuate reflections of the key design elements. Across the lobby, which features twisted bronze cords in both high-polish and matte finishes, the vertical surfaces are lit, casting the space in a warm glow and accentuating the patination of the brass.

Architect for the renovation, Ron Arad, commented that one of the main draws to take the extensive renovation project was the scandal that gave the Watergate its lasting reputation. He said: “I have a confession to make: our initial attraction to this project was actually the Watergate scandal, and it is absolutely fantastic that this starting point led us to work on a project that also has such a great architectural legacy.”

Arad continued that, from a design perspective, his main ambition was to enhance the original designs of Moretti, while adding his own creative flair. “Working within such a significant period piece, you can’t ignore the context, but at the same time you don’t want to mimic it,” he said. “Instead you want to create something complementary, but importantly, something new.

“We have tried to enhance Moretti’s original curves using our own, while at the same time influencing the anticipated flow of people through the spaces.”

This focus on paying homage to Moretti’s original design, while striving for something new has resulted in the creation of a Mad Men-esque tribute to ’60s Modernism, to the point that you would expect the stunning new-look whisky bar to be full of Don Draper types, puffing on cigarettes and sipping on glasses of top-end scotch as they discuss their latest ad campaigns. In fact, the hotel uniforms were even designed by the show’s costume designer.

Following a recommendation from the local architect and an interview with the owner, CM Kling + Associates came on board with a brief to ‘provide a world-class luxury hotel’ with a pre-assembled, international design team, as Ghatan explained: “The team of artists, architects and interior designers was spread across the globe. It required interpretation of various design styles.

“The Lighting Design team worked on all areas of the hotel, whereas the interiors groups were broken up into specific areas. The LD therefore needed to ensure that the designs worked together.”

This allowed CM Kling to fine-tune any plans and make sure they were in keeping with both Ron Arad’s and Luigi Moretti’s design. A key consideration of which was to ensure that light, colour, movement and shimmer could be introduced, while keeping glare to a minimum. This was particularly important because reflective materials were key to the design throughout the hotel’s public spaces and created depth, shape and reflections to change the feel and move light into the space. Any glare in this high-traffic area would be distracting for both hotel guests and staff.

The design team built several extensive mock-ups to address challenges with the lighting and the materials. Ghatan continued: “The lighting was critical to feature these materials and shapes without glare and hotspots. We hid many light sources in ceiling coves, wall coves and other building elements, and down lights were chosen, which produced little to no glare.”

The building itself presented a number of challenges. The Watergate is a registered historical landmark, and design is constrained by historical renovation regulations so the exterior of the building couldn’t be touched. Inside the building, low ceilings – standing at just nine feet – proved another challenge. Ghatan said: “The low ceilings meant that we couldn’t specify traditional showpiece chandeliers, so we created a custom vertical chandelier – the whisky wall – which ties together the lobby and the bar. We visually heightened the space by emphasising reflective gradients on the floors and ceilings with light from coves.”

According to Ghatan, the collaboration between CM Kling and Ron Arad provided a unique experience for the lighting designers in his firm. Both the project and the client benefitted from the energy and willingness to collaborate among the entire design and construction team.

“The mock-ups and collaboration with the architect, Ron Arad, and the Italian manufacturer of the metal elements was an incredible experience for us. Collaboration is the most important aspect of our design business, and we were thrilled to manage such an extensive, detailed undertaking, with three contributors in three different countries,” he said.

And Ghatan believes the renovation captured the essence of the Watergate spirit. “Our lighting design and collaboration with Ron Arad and his team’s vision has created a space that flows, contrasts and offers nooks for all the hotel’s secrets and rumours. The lighting design creates a visual balance and continuity throughout the entire hotel.”